The vindication of teaching and theology in a monastic community: Lanfranc of Le Bec and his students Anselm and Ralph

Monastic schools such as Le Bec played a major role in the making of systematic and even philosophical theology in the middle ages. While the monastic life is regarded as a continued experience in learning in the Benedictine tradition, institutional schools are not essential to it and monks often had to justify their engaging in teaching and theology over and above the study of the Bible. After sketching the problem with a special focus on Anselm, I take a look at the genesis and rise of the school of Le Bec following the arrival of Lanfranc, and give a short outline of what we can gather about him as a teacher. I then turn to Ralph of Battle, one of Lanfranc’s closest associates and a notable theologian in his own right, and explore his relation to Anselm.
His recently edited
De inquirente et respondente provides us with a vivid image of what teaching on an advanced level could have been like at a monastic school in the Lanfrancian tradition. In this dialogue, Ralph endeavours to adjust the discussion of theological topics to the spiritual commitments of master and disciple alike, in what may be termed a thoroughly “altruistic” model of teaching and learning, and aims to demonstrate how speculative theology and the monastic life are not only compatible with each other, but complement each other in important ways.

The vindication of teaching and theology in a monastic community: Lanfranc of Le Bec and his students Anselm and Ralph


The vindication of teaching and theology in a monastic community: Lanfranc of Le Bec and his students Anselm and Ralph

This paper is focused on a systematic analysis of the Anselmian concept of omnipotence. Starting from a reading of Anselmian sources (from Monologion to Cur Deus Homo) and, in a continuous dialogue with contemporary interpretations, it is shown what Anselm means by divine omnipotence. Through the analysis of Anselm’s language and logic the paper reconstructs the history of the term and its particular meaning within the writings of the archbishop of Canterbury. Anselm’s account of omnipotence, the author notes, differs from the previous tradition because it is not based on the idea that God can do everything.

In this essay, I offer at first a succinct overview of how, in the last decades, scholars of Anselm treated the relationship between philosophy and theology in his thought. Then I argue that it is Anselm’s theological perspective – i.e., the fact that faith shaped his whole life, including the intellectual activity – that allowed him to develop a rigorous and original philosophical reflection.

The figure of Anselm of Canterbury is a veritable crossroad in the theological debate at the mid of the Twentieth Century. Within the Catholic milieu, particularly the French-speaking one, the understanding of the historical relevance of the archbishop of Canterbury and his theological account became essential to define the features of the development of Theology in the Late Middle Ages and throughout Modern Age. More in detail, Henri de Lubac, Yves Congar and Marie-Dominique Chenu provided three different interpretations of Anselm’s historical legacy. While Lubac initially considered the author of the Proslogion as the break-point between the “mystical” theology and the “dialectic” theology, Congar and Chenu stressed the more complex palace of Anselm within the late Eleventh and Early Twelfth-Century theological debate.

In opposition to the mainstream of a contemporary thought defined as individualist and critical against the traditional values of Western Civilization, on one side, and to the reactionary recovery of a fake image of the Middle Ages, on the other side, some authors of the early twentieth century belonging to the German language area found in the monastic spirituality and the medieval theological traditions the source for thinking a new kind of society. Aim of this paper is, therefore, to focus authors like Paul Landsberg, Hugo Ball, Martin Heidegger, Romano Guardini, to show the crucial role of this philosophical tradition and his topics in the discussions about a reformation of the contemporary society and a rethinking of some principles of the Western Civilization.

Aim of this article is show how the legacy of Anselm’s thought, and more extensively of high medieval monastic philosophy, acts on the mature development of Pavel Florenskij’s thought; at the same time, we intend to frame Florenskij’s philosophy in a wider context of rebirth of medieval studies in XX century’s Europe. In such a way we would affirm that the Russian philosopher is an essential part of the historical process of self-awareness of a civilization which is firmly rooted, according to Florenskij, in Medieval Platonism, assumed as a model of a philosophical conception, of which Florenskj himself is heir and witness.

The path that we will propose will be to show how Anselmo d’Aosta, in front of the choice on the convenience between myth and dogma, seems to address the myth. Along the article we will explain why this choice and how Anselmo arrives and present it. To do this we will focus mainly on the textual and hermeneutical analysis of the Cur Deus homo and then let ourselves be tempted by the provocations that Hans Blumenberg proposed in his text Elaborazione del mito precisely on this question.

In this article, the author shows that the starting point of Anselm’s philosophy is faith. Referring to the Karl Barth’s reading of the Proslogion and Cur Deus Homo, it is shown how the Anselmian one is a theological reflection. A faith, however, which is not limited to simple belief but which lays the foundation for questions and researches. This article discusses this particular conception of faith and its consequences competing with recent and past interpretations.

The article intends to investigate the interpretation of Anselm by Mario Dal Pra and Sofia Vanni Rovighi. The two historians of philosophy – active in Italy after the Second World War – read Anselm starting from the controversy with the Idealists. Although they started from the same perspective, they proposed two alternative readings of Anselm’s philosophy. Despite the differences in contents, the way of reading Anselm was similar in form. In fact they did not propose an ‘innocent’ lecture of the Archbishop of Canterbury. Instead, they provide the reader an ‘evaluation’ of his philosophy, The aim of the two interpreters was to highlight the contradictions and inconsistencies of the demonstration of the existence of God.
This article intends to reconstruct the two interpretations considering that the basis of the two criticisms was a different conception of the notion of experience.

In dialogue with various studies that, between the twentieth and the beginning of the twenty-first century, showed the centrality of the "key of love" in the pedagogy of Anselm of Aosta, this contribution aims to highlight the elemental link between rectitude and dynamism of love with regard to the praxis and the ratio of his educational action, and shows that "key" is intrinsically in relationship with the righteousness of the educator and with the maturation of it in the pupil, accompanied in as much so to the full and free fulfilment of his humanity.

Starting from the Stolz’s interpretation of Anselm’s works, this article aims to show the Salmann’s own interpretation and joint it to the resonances of this reading in the contemporary theological thought. In this context it will be elucidated the relevance of Salmann’s thought about the notion of "sapiential monastic theology", to evaluate this point of view as a possible development and fruitful application of Anselmian legacy. 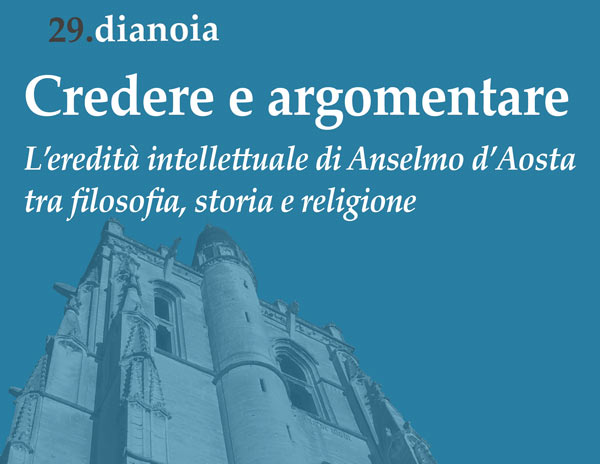