What is the Marxian contribution to the theory and practice of historiography? In Eric Hobsbawm’s opinion, Marx transforms historiography into a social science and explains history in its whole, therefore providing a fundamental theoretical instrument to contemporary historiography. It is well known that Louis Althusser’s position is radically different, since the French philosopher labels as “empiric prejudice” the thesis that sees at the basis of Marxian theory a continuous and homogeneous conception of time. The essay takes a position in front of this famous theoretical argument, focusing on some pages from the Capital (unpublished chapter VI and the chapter XX of the third book), highlighting the matter in question, which is not only philosophical but rather practical and political, and about the historical dimension of Marxian analysis.

With his theory of “history”, Marx tries to keep together both the continuity and discontinuity of the historical process. He develops a complex theory of historical action, where the actors are understood in their trans-individual, functional character: they are “forms”, and not just factual “figures” of the British capitalism of the 19th century. A better definition of crucial categories such as “class” or “period” will show the relevance of his thought to outline the long-run trends of the capitalistic mode of production and the structure of our contemporary society.

When Marx speaks of contradictions, he means real contradictions, comparable to Kant’s notion of «real oppositions» [Realgegensätze]. Marx’s analysis of the commodity provides an example that is fundamental for the critique of political economy. On the one hand, the commodity exists as use-value, as concrete wealth; yet on the other hand, and primarily, it has value as abstract wealth, in which concrete wealth is negated. The reason for the coexistence of these contradictory forms of wealth is to be found in the relations of production. Although commodity production presupposes the social division of labour, it is simultaneously unsocial. In other words, the producer of the commodity produces for society, but he does so in order to fill his own pocket. Since the early history of Marxism, there has been a persistent demand to conceptualize Marxism according to Marxism’s own fundamental principles. The essay tries to respond to these questions, developing an understanding of Marxism through the lens of what Marx called his dialectical method.

Postwar Italian Marxism flourished thanks to the development of Gramscianism and the emergence of operaismo and the Della Volpe school. Nonetheless, only at the dawn of the ‘70s did a new generation of militants and scholars start focusing on the most delicate aspects of the mature Marxian critique of political economy. The exploration of the Marxian dialectic between “limits” and “barriers”, initiated by Lorenzo Calabi and Antonio Negri, is an example of that: in the first part of the article, I examine their interpretations in the light of the Marxian Grundrisse, where this dialectic is developed with regard to the contradictions between sphere of production and sphere of circulation. In the last part of the article, I argue that in order to overcome the limitations of these interpretations it is necessary to set the relation between “limits” and “barriers” against the background of the passage from limit to restriction demonstrated by Hegel in the Science of Logic.

In this paper, I propose to offer a brief reconstruction of Marx’s reflections on the social origin and function of language. After outlining the material assumptions of human history (§ 1) and of the origin of language (§2), I will outline the language as a typically social product (§ 3) and I will reconstruct the criticisms that Marx addresses to the abstract and ideological character of terminology and of the categories of bourgeois philosophy and economics (§ 4).

Which are fundamental themes of Giovanni Gentile’s essays dedicate to Marx’s thought between 1897 and 1899? Which is the relationship between those essays and the interpretations given by Antonio Labriola and Benedetto Croce on the same Marx’s philosophy? The essay tries to answer these questions in order to highlight how Gentile’s interpretation of Marx is, from one hand, the result of Spaventa’s important legacy and, on the other hand, it contains other issues that come out again significantly in the Actualism of the 1910’s.

The essay aims to establish a comparison between the way Marx and Heidegger conceive Modernity. Despite the diversity of their philosophical point of view, Marx and Heidegger interrogate the question of Modernity, its origin and nature. While Marxian critique of political economy and of philosophy analyzes Modernity starting from the concept of Entfremdung, Heidegger’s interpretation of the History of Western Metaphysics reads the development of the modern age starting from the category of Heimatlosigkeit.

The need to elaborate a Marxian Critique of Practical Reason, which is still lacking, revolves around a reflection on the self. A socialist society only constitues the background, since, recalling Kandinsky’s idea of an «interior necessity», it is the experience that frees itself from the body to decide. While nature is marked by entropy, we are called to carry on life. In Bloch’s essay, together with the Messianic idea of a universal brotherhood, we find the gnostic sense of a story centred on the soul which, crossing metempsychosis, covers a path of deliverance.

A preliminary step is a sketch of the French historical and cultural situation in which Marx’s thought penetrated, from the late nineteenth century to the Thirties: the peculiarities of French Marxism must be considered in order to grasp the meaning of the connection between marxism and phenomenology, which is the argument of this essay. The attention is afterwards focused on two eminent philosophers representative of the so-called (using a Michel Foucault’s categorization) “phenomenology of the subject”: Maurice Merleau-Ponty and Tran-Duc-Thao. The main themes that emerge from this examination are the idea of class rethought on the basis of the phenomenological concept of “prelogical”, the concept of revolution shaped on the pattern of artist’s praxis, an antihistoricist idea of time, centered on the privilege of present, a new dignity conferred to the idea of nature.

Marx inspires what President Xi Jinping recently called the Chinese dream. Chinese Marxism is the form that Marxism took in China prior to, during and as a result of the Chinese revolution. There is a distinction between Chinese Marxism and its realization of Marx’s theory in practice. This paper will focus on the crucial relation between Hegel and Chinese Marxism. Marx is a critical Hegelian, critical of, but strongly dependent on, Hegel. This essay will be arguing that the Chinese dream is not Hegelian, but rather anti-Hegelian, hence unlikely to be realized in a recognizable Marxian form.

The essay aims to illustrate Marx’s political thought, in order to show that Marx’s intellectual figure and proposal are political in itself. The author tries to answer two relevant questions: on the one hand, the meaning of the Marxian Theory of historical development and, on the other hand, Marx’s reflection on State, Revolution and Democracy. Furthermore, the essay shows how the History of Political Thought is interpreted by Marx and, finally, how the History of Political Thought interprets Marx.

The Critique of the Gotha Programme, written by Karl Marx in 1875 and posthumously published in 1891, contains his most detailed statements on the essential features of a communist economy. One of them, the end of the exchange of commodities, was a widely accepted hallmark of the post-capitalist society among German social democrats like Kautsky and Hilferding, as well as among Russian Bolshevists, who actually tried to apply Marxian theory in Soviet Russia. This essay follows the fortunes of Marx’s theory through the entire history of the Soviet Union and of the East European “popular democracies”: from Bucharin’s enthusiastic case for overcoming the exchange of commodities to Lenin’s retreat from war communism in favour of the New Economic Policy; from the reasons given by Stalin for the existence of market relations under socialism to the use of such relations in the Sixties - by reformers like Brus, Šik, as well as by GDR economists in the Ulbricht era – as a tool for getting rid of the centralised planning model. At the end of the Eighties, some of the former reformers emphasized the victory of market relations over planning. In more recent debates, some marxist authors insisted on the incompatibility between exchange of commodities and true socialism, while others held Marx’s model of socialism accountable for the failures of real socialism.

In the mid-seventies of the last century, starting from different theoretical assumptions, both Norberto Bobbio and Mario Tronti asserted the weakness of Marx’s critique of politics within his critique of political economy. After having recalled the main elements which characterize Bobbio’s and Tronti’s thesis, the author - according to the tradition of thought named italian “operaismo” - reaffirms the specificity of the Marxian critique and the direct political relevance of the “derealization process of labour”. However, given the possible and recurrent impasse which follows the classic reference to “Smith-Hegel-Marx” line of thought, the Author suggests also an alternative way of considering the question of the genesis of political economy, as stated by Michel Foucault through his concept of gouvernementalité.

The essay investigates the crisis we have to face today as a profound and deepening structural crisis which needs the adoption of far-reaching structural remedies in order to achieve a sustainable solution. In this respect, it is necessary to clarify the relevant differences between types or modalities of crisis. It is not a matter of indifference whether a crisis in the social sphere can be considered a periodic/conjunctural crisis, or something more fundamental than that. For, obviously, the way of dealing with a structural crisis cannot be conceptualized in terms of the categories of periodic or conjunctural crises. 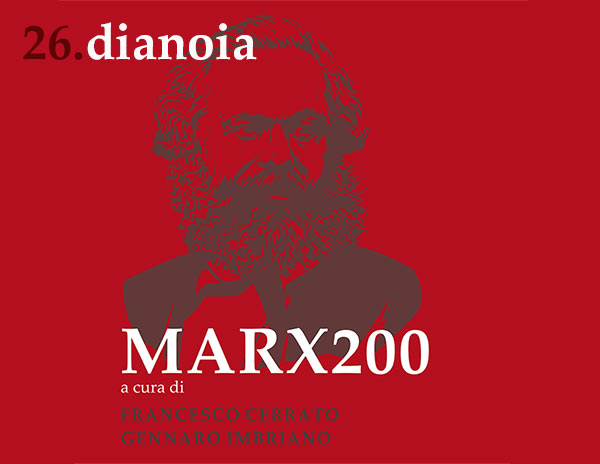