The essay offers a new reading of the dialectical structure of Hegel’s philosophy of right. The aim is: 1) to bring out the close connection between dialectic method and scientificity; 2) on the basis thus gained, to sketchily trace the dialectical process at work in the philosophy of right. The essay will be limited to the path that leads from abstract right to the beginnings of ethical life. It will thus enable us to understand the relationship that Hegel establishes between the world of right and its scientific understanding.

The following paper tries to show the relationships among the concepts of «thing», «property» and «living bodies» in Hegel’s Grundlinien. Particular importance is given to the conceptual difficulties in justifying the private appropriation of the living forces constituting the human capacity of labour. The role of jurisprudence in the «administration of justice» (Rechtspflege) consists in asserting the validity of law at the level of civil society.

The paper aims at discussing the concept of personality in Hegel’s Elements of the Philosophy of Right in order to focus on the ambiguity of its status. It aims in particular at explaining and enhancing the expression «madness of personality », which occurs in § 62 and refers to the context of Hegelian anthropology and of its treatment of madness in general. The contribution then reconstructs the textual links with the two editions of the Encyclopaedia (1817 and 1830) and with certain passages of the Phenomenology of Spirit referred to in the paragraphs devoted to the personality. By bridging Hegel’s philosophy of subjective spirit and his treatment of personality in the philosophy of right I argue that the critical aspects of the concept of personality, due to its constitutive duplicity, can thus be found in the Elements text itself.

In his theory of punishment, Hegel interprets the retribution of injustice as the act of the eumenides who have been awakened by the crime. They are thus servants of law (νόμος) rather than goddesses of vengeance. Nevertheless, the question remains whether the Erinyes, who according to the ancient myth were first made the well-meaning (Eumenides) by Athena, cannot also reawaken as such when the legal consensus breaks down. Hegel’s interpretation of Aeschylus’ Oresteia shows that the Eumenides are to be regarded as permanent powers of nature that must be constantly controlled and appeased. This is true not only for antiquity – depicted by Hegel in the Phenomenology of Spirit as the struggle of human with divine law – but also for modern morality, which is characterized by an irrevocable rift: the system of needs takes the place of the underworld of the Eumenides in the midst of morality and undermines the legal consensus with its dynamics in the «rabble».
In the indignation of those who no longer find their right in the existing law, the Erinyes awaken in their original form.

The paper shows how the role played by the concept of «reconciliation» (Versöhnung) in the Hegelian philosophy of the objective spirit demonstrates its critical connotation; secondly, the essay compares two forms of knowledge (philosophy and political economy) that share, in Hegel’s perspective, the attitude to bring out the systemic rationality hidden by the chaotic surface of events. In the last part, the paper addresses the issue of the function performed by the concepts of «unexpected effects» and «impersonal rationality» (the cunning of the «invisible hand» and of the Vernunft) within the theoretical framework of those two forms of knowledge.

Despite its being the very first commentary on Hegel’s Grundlinien der Philosophie des Rechts, Karl Moritz Kahle’s Darstellung und Critik der Hegelschen Rechtsphilosophie, published in 1845, has been widely ignored so far.
While introducing it to the attention of the scholars, this article focuses on its remarks on Part one of the
Grundlinien («Abstract Right»). Kahle reads it on the basis of his view of Hegel’s philosophy as a worsened development of Fichte’s thought. He then has objections to almost every step Hegel makes: on the concept of right, on the partition of Objective Spirit, on property, contracts, tort and crime, and on the justification of punishment. Kahle’s remarks depend largely on his legal education, but interestingly enough some of them aim to offer a better dialectical inference than Hegel’s own one.

Since the end of the cold war, the radical controversies concerning Hegel’s Philosophy of Right and its political significance have been mitigated. However, the current “modernizing” interpretations of the book and the student notes of Hegel’s lectures still provoke controversial discussions. The article focusses on four such controversies: The place of human rights, the division of power in a constitutional state (Rechtsstaat), the impact of the crises and the “dialectic” of civil society, and the secular character of the Hegelian state. In the view of Post-Hegelian historical experiences as well as social and scientific developments some of Hegel’s doctrines are progressive but others had fatal repercussions. The latter cannot be cast away as superficial assimilations to Hegel’s cultural surroundings. Instead, they have to be traced back to basic premises in Hegel’s metaphysics of subjectivity and substance.
To make Hegel’s philosophy of Right prolific for philosophical answers to problems of the modern state requires a fundamental transformation.

Hegel and Rawls seem to be two scarcely compatible authors, the first being a critic of the social contract and of Kantian morality, the second being a neocontractualist and a reassertor of Kantian moral constructivism; the former being a speculative philosopher, the latter being an analytically trained philosopher. The first impression, however, can be misleading and the reading of Rawls’s works reveal an interest and a respect for Hegel as one would not have imagined: Hegel as a philosopher of reconciliation and the social rootedness of morality. With what reliability, on the theoretical and historical level, remains at least in part to be established.

One of the most fascinating, as well as debatable, aspects of John Rawls’ major opus – A Theory of Justice (1971) – is his claim that Liberalism and its institutional implementation, liberal democracy, are neutral towards values: they can therefore be described as the result of a rational choice dictated by human rationality.
In his subsequent works Rawls tried to accommodate criticism to this view while preserving the basic idea of liberal neutrality. This essay examines Rawls’ claim about liberal

The article explores the role of merit within John Rawls’s work, A Theory of Justice, in order to understand the centrality of this notion in his proposal known as justice as fairness. After having given a general account of this proposal, the article focuses in particular on the notion of merit, which connects to other principles (redress, reciprocity, and fraternity) of Rawls’s theory, showing an internally coherent system based on an intuition (the moral arbitrariness of natural gifts and social advantages) capable of effectively accounting for the principle of difference.
The article closes with a brief discussion of an evolution in the debate on merit within another theoretical proposal, luck egalitarianism, which goes in the opposite direction to that of Rawls.

Is a political consensus possible based on reason alone, without the intervention of force or persuasion? John Rawls’ answer in Political Liberalism is that of epistemic abstinence. By renouncing the intervention of the True, while accepting only the Reasonable, by mobilising public reasons and not personal or collective beliefs, it would be possible to regulate political conflicts and stabilise democratic institutions without the intervention of force. But this solution, with its distinction between the “public” and “non-public” spheres, has been widely criticised, and, somewhat like the “constitutional patriotism” advocated by Habermas, it seems too weak a basis for protecting the democratic consensus against its enemies. Above all, it requires excessive cognitive and moral competences. After analysing the conditions of possibility of epistemic abstinence, I respond to three sets of objections and conclude that, as much as cognitive and moral competences, public justification needs a truly democratic and pluralistic public space. The effectiveness of “public reason” is a social and political problem, not simply a cognitive or a moral one.


Reason and Democracy: Are the Cognitive
and Moral Demands of Public Reason Excessive?

Methodological nationalism assumes that, to understand a phenomenon, nationstates are the relevant units of analysis. This assumption has been recognized as a source of bias in most of the social sciences. Does it bias Rawls’ understanding of justice, too? This paper argues that it does for at least two reasons. Firstly, what Rawls thinks justice requires on a global scale falls short of what states and international organisations actually do. Secondly, framing the difference principle in national terms, as Rawls did, is a way to increase the “citizenship rent”, or the revenue a person receives just by being citizen of a rich country . The paper argues that methodological nationalism biases Rawls’ understanding of justice by affecting both the plausibility and the coherence of his theory.


Is Rawls’ Theory of Justice Biased by Methodological Nationalism?

John Rawls’s People’s Law is presented by the author himself as a realistic utopia. In this paper, this idea is critically analyzed, highlighting, on the one hand, the problems that derive from the identification of the protagonists of the People's Law and, on the other, the weakening of the rights discourse, which are presented according to a minimalist strategy. This allows us to consider that in Rawls's proposal the weight of the realistic component is greater than that of the utopian component.

A Theory of Justice was an instant success when it was published in 1971. The book was hailed as the work that would “resurrect” political philosophy as a scholarly discipline and as a public resource. The key to such triumph was to be sought not so much on the substantive contents of the book, as on the style of doing political theory that Rawls introduced. A Theory of Justice combined the grounding of normative claims on a reconstruction of the background political culture with the application of analytical philosophy to political matters. The more that communitarians, feminists and Marxists articulated their theories against Rawls, the more that a “Rawlsian bloc” emerged and displaced other approaches, making of A Theory of Justice a sort of “book zero” of the discipline. Fifty years onwards, it is time to draw a balance, not least in view of the drastic changes intervening in political cultures, and in the set of problems that we experience in urgent need of being analysed by political philosophers. Particular attention is paid in this article to the assumptions made by Rawls about the depth and breadth of the “overlapping consensus” as the foundation of his normative claims, and of the unstoppable academic success of Rawls’ egalitarian theory happening at the very same time that inequalities in income and wealth exploded in most of the world, not least in the US. On such a basis, I argue that it is only proper to emphasise that Rawls’ theory is only but one of the possible theories of justice, and that much will be gained by rendering explicit the rich implicit work undertaken by Rawls when elaborating and reconstructing the political culture of the United States, the actual fundamental basis on which his work rests.


Rawls Beyond the Rawlsistas: Towards a Modest Reading of A Theory of Justice 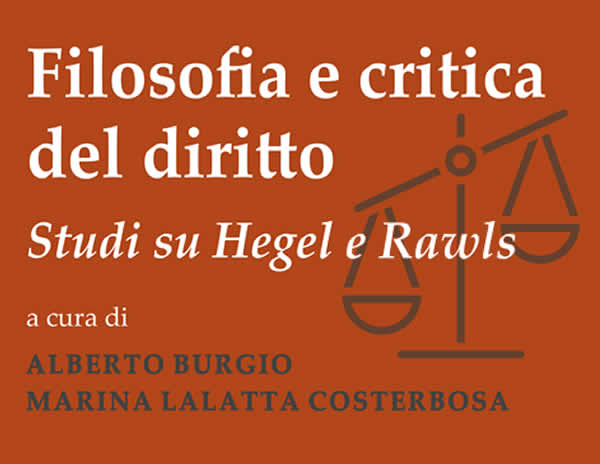